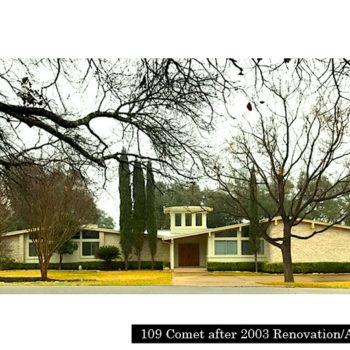 Original Lakeway lot #106 was the new site of 109 Comet, built in 1966 as a tiny 1,600 square foot bungalow. 10 years later, the then owners replaced the carport and added a two-car garage while extending the northern interior portion of the house by adding an additional 500 square feet and a back porch. In 2003, the current owners (Steven Riedlinger and Stephen Schrimpf) added lot #105 to expand the home to its current size of 3,900 square feet.

Through every expansion, it was important to preserve the unique exterior with native stone and the architectural lines of this mid-century home.

Designed by Steven Riedlinger and Stephen Schrimpf and drawn up by renowned architect, A. Ray Payne.

This property is also said to have the oldest Live Oak in Lakeway.

This site uses Akismet to reduce spam. Learn how your comment data is processed.