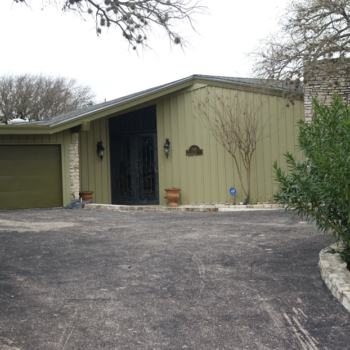 The house at 818 Mariner in Lakeway was designed in 1966 by W.R. Coleman and has views across Lake Travis to Point Venture.

Between 1961, when he became the first American to journey into space, and 1971, when he smacked a golf ball on the moon, NASA astronaut Alan Shepard, Jr. commissioned a vacation home in Texas.

He built it not in Corpus Christi, where the Annapolis grad learned to fly a single-engine biplane, nor in Houston, his home for three decades, but on a rocky promontory overlooking Lake Travis.

At the hilltop house, the highly competitive ace, who liked to be first in everything he did, had one of the most dazzling panoramic vistas in all of Lakeway.

The house, designed in 1966 by W.R. Coleman with input from Shepard and his wife, Louise, commands a spectacular 180-degree view of the main basin across from Point Venture.

Standing on its 85-foot-long deck, Shepard could watch the sun rise and set, storms roll in, stars come out and all phases of the moon, where he and Ed Mitchell spent 33 hours during the Apollo 14 mission before their three-day trip back to Earth.

"It was a place where my father could get out and study the stars," says daughter Juliana Shepard Jenkins, who still has his telescope. The space pioneer, who adored his six grandkids, gave it to her son Shepard Coleman, now an Austin apartment locator.

For most of the '60s, the astronaut was medically grounded with an inner-ear disease that causes vertigo. Restored to full flight status after corrective surgery, he commanded America's third successful lunar mission at age 47.

Built for the views

In the 3,182-square-foot stone-and-wood house, built by Andy Kivlin, the living room, dining room, kitchen, master bedroom and guest bedrooms all have floor-to-ceiling windows that open to the deck overlooking the lake.

"It was a family place," Jenkins says. "We were huge on family. My sister Laura was in college. Father was in NASA and gone a lot. We went to boarding school and spent all summer and Thanksgivings at Lakeway."

Jenkins remembers staying in a room at Lakeway Inn, now Lakeway Resort and Spa, while her parents scouted for a getaway site. They chose Lot 732 in Section 6, she says, "because of its view, because my father could study the stars there and because the lot below wouldn't block the view."

In fact, Jenkins says, her dad made sure it didn't block the view. When plans called for the house below to be 6 feet higher than it is now, Shepard, known to some as the Icy Commander, fired himself down to the Village of Lakeway and got them changed.

"Daddy would come in on weekends," Jenkins says. "He would fly into the (Lakeway) Airpark. There were no other planes there then. We had an old Ford truck, and our job was to get the cows off the runway so my father could land."

At the inn, Julie and younger sister Alice each had summer jobs. "She worked at the Beef 'n' Bun," Jenkins says. "The guy who cooked the hamburgers was Jeff Blank (who has owned Hudson's on the Bend restaurant since 1984). And I took care of everybody's kids at day camp."

The family was so private that many parents didn't know that the lively teen taking their children swimming, riding and picnicking was the daughter of the famed test pilot, who rode into history in the Project Mercury spacecraft Freedom 7.

Julie's bedroom was one of two facing the back rock wall with a Japanese garden and water feature designed by Louise Shepard. "My mother had a love of Japanese art," her daughter says. "She was an artist herself - a needlepointer who created her own designs."

Downstairs is a game room with a full bathroom and sauna. "Daddy loved his sauna," Jenkins says. "It was great." And so his family could play some wildly competitive table tennis, he cut the legs off a Ping-Pong table and put it on top of the pool table.

While their parents, both avid golfers, played at Live Oak, the original Lakeway course, the daughters staged scavenger hunts, rode horses, anchored at Briarcliff marina to watch movies on a big screen from their boat and water-skied on Lake Travis.

"We were all unbelievable skiers," Jenkins says. Her father, who, she says, "accepted challenges as a daily thing," taught himself to ski barefoot and showed his girls how to build a body pyramid on water skis.

"The one thing daddy stressed with us was safety. There were a lot of crazy people out on the lake." And during a lesson, she was surprised to see men in boats "going way too fast," creating a perilous wake and ordering everybody to get off the lake.

"Turns out it was the Secret Service telling us LBJ was coming through on somebody's yacht," she says. "We had to go back to the marina."

In 1988, Jenkins returned to rent a place in Lakeway for two years while working in corporate sales for the resort.

If she came now to the house at 818 Mariner with a plaque honoring her dad, she'd see a somewhat different interior.

The 19-foot-by-19-foot living room with its stone wall, vaulted ceiling and fireplace (now with gas logs) looks much the same, but owners Carroll and Barbara Jackson of San Antonio have done extensive remodeling.

Their $350,000 improvements include tile in all living areas and custom cabinets, granite counter tops, a center island and built-in microwave and oven in the kitchen. The dining room has a built-in buffet and wine refrigerator. A fifth bathroom was added, and all were remodeled.

"We've loved the house, loved the area," says Carroll Jackson, who recalls the day he first saw it. "It was as if a magnet pulled us to it. We were trying to do something to keep our girls from fighting with each other, so we drove up to Lake Travis. Our oldest saw a sign for an open house."

And although they weren't looking for a vacation home, he says, they liked the place with the big view so much they bought it for $400,000 in 1999. Now the kids are grown, he says, and he and his wife want to travel.

For Shepard, a New Hampshire native who went from Navy pilot to national icon overnight, the lake retreat offered respite from the media spotlight.

"None of us expected it," remembers Jenkins. "Even NASA wasn't ready for it. We woke up in the morning and the entire yard in Virginia Beach was filled with police and media."

Her father had a hard time with instant celebrity, she says. "My mother had a wonderful faith. She was a very gracious, lovely woman. She helped him through it. He became more gracious."

In 1989, her parents retired to a house overlooking beautiful Cypress Point golf course in Pebble Beach, Calif. Married 53 years, they died within five weeks of each other in 1998. Their ashes were scattered together from Navy helicopters hovering above an inlet near their home.

Today, Jenkins, who lives in Wimberley, remains active with the Astronaut Scholarship Foundation, begun as the Mercury Seven Foundation and sparked by her quietly generous dad. The foundation, supported by 80 astronauts, has awarded $2.8 million in scholarships to 259 engineering and science students.

Next year will be the 50th since Shepard, after sitting atop a Redstone rocket for three hours before the first U.S. manned space flight took off, snapped: "Why don't you fix your little problem and light this candle?"

It's now 26 years since her parents sold the family's vacation house in Lakeway, but Jenkins remembers it fondly. "It was a very safe, wonderful place," she says. "When daddy said we were selling it, we all cried. My heart is still there."

This site uses Akismet to reduce spam. Learn how your comment data is processed.